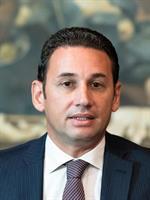 Mr Pace Ross is the Administrative Secretary of the Archdiocese of Malta, following his appointment by Archbishop Charles J. Scicluna in 2015. He previously served as Director General of the National Statistics Office for six years, sitting on a number of national and European committees, including the European Statistical Advisory Committee (ESAC). Mr Pace Ross is a non-executive director on APS Bank plc. He is also a Board member on the Voluntary Solidarity Fund, a charity which embraces core values inspired by and aligned with the Catholic social teachings on solidarity. Mr Pace Ross also sits on the Board of an investment company.