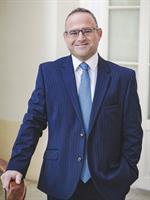 Kevin is an experienced professional with almost 25 years experience in leadership of the business community in Malta having occupied the position of Director General of the The Malta Chamber of Commerce, Enterprise and Industry until 2020.  In this position, Kevin has, of course, already served the business community extensively with which he has built for himself a distinct reputation for integrity and professionalism and has always been held in high respect by his team and all the stakeholders he has connected with throughout his career including businesses, political leaders and social partners.

Having graduated in Economics from the University of Malta in 1994, Kevin worked briefly as an Economics Officer within the Economic Planning Division in the Ministry of Finance before joining the Chamber of Commerce in 1997.

As Director General, Kevin occupied overall responsibility for internal operations and general management of Chamber; for designing and implementing Chamber policies; for organising the lobbying function with Government, trade unions and social partners; overseeing the media/communications and internationalisation and SME advisory functions; and for Statutory matters.  Kevin served as a de facto advisor to the Chamber Council on technical and policy matters.

Kevin represented the Malta Chamber in conferences and in the media as well as on a number of national boards including the MCESD, the MEUSAC Core Group, Education Malta, the Malta Business Bureau, the Retail Price Index Board besides BusinessEurope and Eurochambres at the European level.   During his time at the Chamber, Kevin was actively involved in the EU accession preparations for Malta as well as in the merger process with the Federation of Industry which took place in 2009.

Kevin brings with him to the Malta Employers’ Association a wealth of knowledge, experience and contacts accumulated in his career.