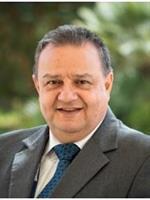 Ivan’s business experience spans over 35 years with work experience in the manufacturing sector, hospitality, aviation and services industries, covering Quality, Operations and Human Resource Management and Development. He is a Henley MBA graduate.

Ivan started his working career at Foster Clark Products where he occupied managerial positions in Quality and Operations and was instrumental in the setting up of one of the company’s factories producing sauces, fruit jams and food condiments. He moved on to Playmobil after almost twenty-five years, to head the HR Department. During this period he worked closely with MCAST, the Malta Chamber of Commerce Enterprise and Industry, serving on the Business education Committee, later the HR Committee, MEA and other organisations including the two major Unions. He joined Palm City, Libya (part of the Corinthia Group) in 2014 heading the HR Department before moving to Medavia to head the HR and Corporate Communications department, a position he occupied for five years before joining Seifert Systems Ltd, leading the HR Department. Ivan has served on boards of both public and private companies including disciplinary boards as an independent member. He was an elected member on the Board of FHRD and served also as president from 2013 to 2015. Ivan has been sitting on the MEA Council since 2016.